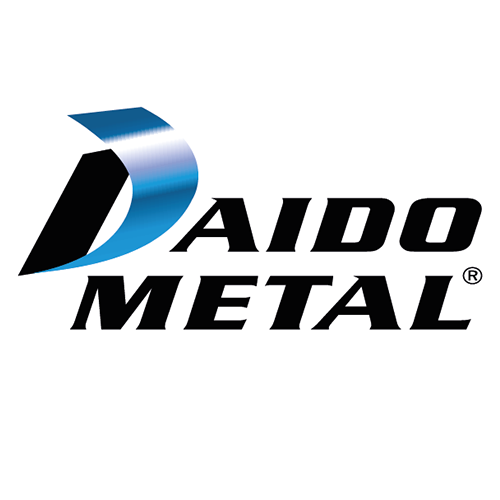 When it comes to digital tools, you want to stay compliant. COVID-19 has not only changed the way we live, but also the way we work and communicate. In this context, few other tools have gained the same level of attention as quickly and as strongly as video conferencing.

From ‘Which video conferencing tool should we use?’ to ‘Which alternative to Zoom can we use?’, we have received numerous questions over the past several months.

Zoom has been the subject of frequent criticism due to data protection issues. Luckily, there are alternatives to Zoom, and we're covering all the relevant data protection questions related to video conferencing. Here’s everything you need to know about compliant Zoom alternatives, including their advantages and disadvantages.

What you need to know in a nutshell

Does a perfect alternative to Zoom even exist?

The most important issue first: there is no such thing as the perfect alternative to Zoom. Which tool is optimally suited to your needs depends on your company and what you would like to use the software for. In other words, it all depends on the application.

What do you actually need Zoom and its alternatives for in the first place?

It makes quite a difference whether you need the software for internal meetings or perhaps for webinars. It is your specific application requirements that determine which functions a video conferencing tool must offer.

Let’s take a look at the most common applications:

Naturally, there are other factors that play a role in addition to the individual functions of the applications. These include the cost and user-friendliness of the tools, the stability of the connection, and the volume of data transferred. You also need to consider the use of the tool on a smartphone, as well as integrating it into existing software solutions.

The list of providers is long — far too long to name them all here. However, the following selection will give you an impression of just how many providers there are on the market.

A selection of video conferencing tools:

Which video conferencing tools are most frequently used?

The biggest and best-known video conferencing tools are all owned by US companies. These include:

A simple Google search for UK-based video conferencing tools illustrates just how little known these are by comparison:

Between February and the end of March 2020, there was a ten-fold increase in Google searches for video conferencing tools. Interest was still six times higher in May than back in February and Zoom is the clear favourite. In terms of user interest, Microsoft Teams and Webex were neck and neck, but well behind Zoom.

Skype, on the other hand, started out strong, but has clearly lost users to Zoom. Blizz, the video conferencing solution by the German software firm TeamViewer, has remained largely unknown by comparison.

Since the start of the coronavirus pandemic, Zoom has seen a veritable explosion in user numbers — not just here, but worldwide: in December 2019, approximately 10 million people around the world were using Zoom every day. In April 2020, that figure had risen to 300 million — roughly thirty times higher than the December figure.

The rise in the number of users has, however, also resulted in a rise in the amount of criticism — particularly in relation to security gaps and data protection issues. While the providers of Zoom are now planning to act with the help of end-to-end encryption (which is generally considered to be the most private way of communicating on the web), the fact that these features are not part of Zoom’s default settings and the fact that there have been numerous data mishaps in the past do not shine a favourable light on the service.

Why is Zoom receiving so much criticism?

In the first few months of this year alone, there were some massive data protection problems at Zoom. Here are a few examples:

At the same time, it is important to remember that Zoom is not the only company dealing with negative headlines. Even established companies can be affected. For example, Microsoft (though not specifically Microsoft Teams) suffered a serious breach of data security this year when 250 million data sets relating to Microsoft’s customer services, including chat messages, became openly available on the net and accessible to all users.

How is data protection handled with the various alternatives to Zoom?

In April 2020, the Berlin data protection authority expressed the view that, in addition to Zoom, Microsoft Teams and Skype could not be used in a data protection-compliant manner — an accusation that Microsoft rejected.

The Berlin data protection authority has not been the only authority to express its concern. The European Centre for Digital Rights (noyb) chaired by Max Schrems concluded that all the large providers’ privacy policies leave much to be desired.

As you can see, only Cisco manages to achieve two out of the three important points (specifically data transfers and retention periods). Nevertheless, the wording on data transfer in Cisco’s privacy policy still needs to be viewed critically. It states that Cisco may be able to share information with service providers, contractual partners, and third parties under certain circumstances. This could relate to aggregated statistics and pseudonymised data.

A closer look reveals that the Cisco privacy policy contains quite vague wording that does not give the reader any certainty — a practice that the European Data Protection Board regards as bad.

What do you need to look out for when choosing your video conferencing tool?

The privacy policy is, of course, just the very first point of reference when it comes to finding an alternative to Zoom that is better from a data protection point of view. Here are some of the other questions you should be asking to be on the safe side when choosing a video conferencing tool:

Is the provider trustworthy?
To find a trustworthy provider, it is worth looking at what other customers’ experience has been. A provider that has been frequently criticised for breaching data protection law cannot be considered trustworthy.

Is the data safe and properly encrypted?
Ensure that audio, video, connection data, screen sharing as well as meta data are encrypted. Regarding the above-mentioned providers, Cisco Webex is the only one to offer effective encryption of media data, even in the free version.

Where is the provider based?
Preference should be given to those providers whose headquarters are in the EU or in the European Economic Area (i.e., the EU, Iceland, Liechtenstein, and Norway). Demodesk and TeamViewer, for instance, are based in Germany.

Which servers does the video conferencing software run on?
Ideally, the application should run on your own servers, not on the provider’s (watch out for the keywords ‘on-premise solutions’ and ‘self-hosted’). This applies to the niche products Jitsi Meet and Nextcloud Talk.

How easy is it to log on?
Clearly, it should not be possible for outsiders to easily join a video conference. A good sign here would be, for example, URLs that are not easy to guess.

Which alternative to Zoom can be recommended?

In general, however, users must be willing to compromise.

For instance, Jitsi Meet cannot always provide an optimal connection. And users have complained that video conferences involving larger numbers of participants do not always run smoothly with Nextcloud Talk. Cisco Webex Meetings, which is particularly good for larger staff meetings, and GoToMeeting, which is frequently used for webinars, on the other hand, work very well, but are based in the USA and therefore fail to score well in terms of data protection.

Are there any tools that are both user friendly and comply with data protection regulations?
User-friendliness and data protection frequently seem to rule each other out. And indeed, there is no provider to date who can fully convince in both areas as the chart below illustrates.

‘Execution power’, the first dimension according to which the tools are evaluated here, stands for a systematic evaluation of market penetration and customer satisfaction. ‘Data privacy’ involves a comprehensive analysis of data security. This is where data encryption, retention periods, data transfers, profiling, and data transparency are evaluated. The assessment also considered previous observations made by data regulators and any data mishaps that may have come to light.

These two dimensions allow the video conferencing tools and their providers to be divided into four groups: 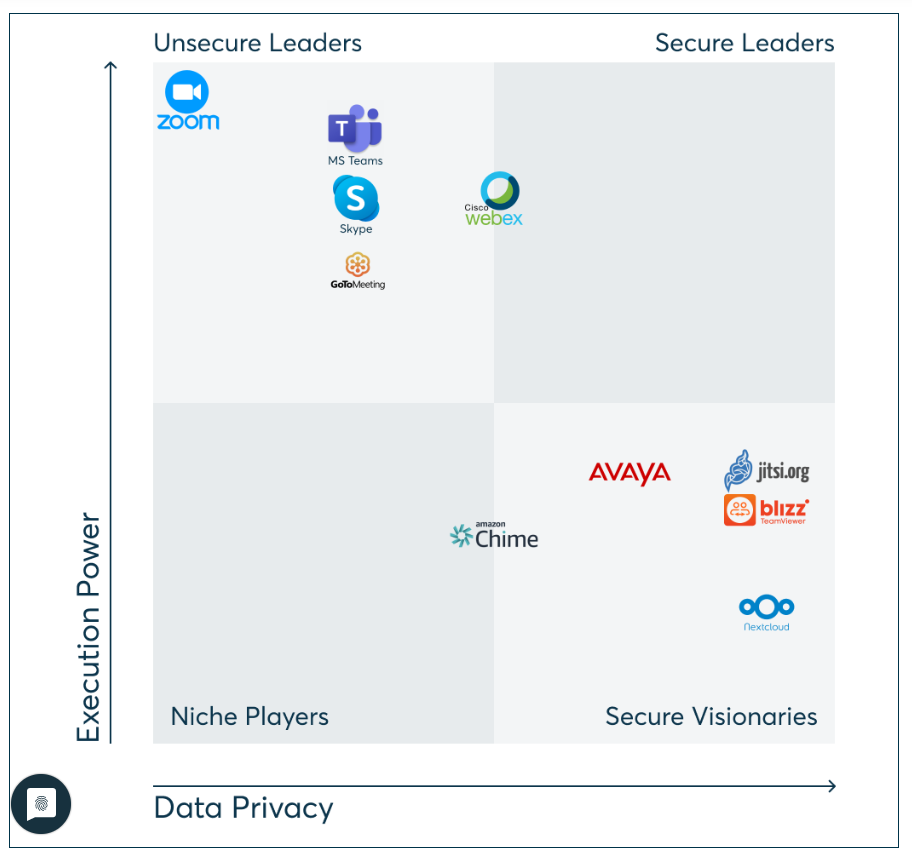 What can I do as a user to ensure data protection for video conferences?

The video conferencing tool itself is, in the end, just one side of the coin. Of course, you as a user can also contribute to data protection by following these recommendations, among them:

Don’t commit to a video conferencing tool too quickly

When choosing the best tool for video conferencing, you need to balance your business needs with data protection concerns. This can, however, make the decision-making process rather time consuming. When in doubt, speak to your company’s data protection officer. They are always a good person to speak to when it comes to putting solutions through their paces.

END_OF_DOCUMENT_TOKEN_TO_BE_REPLACED 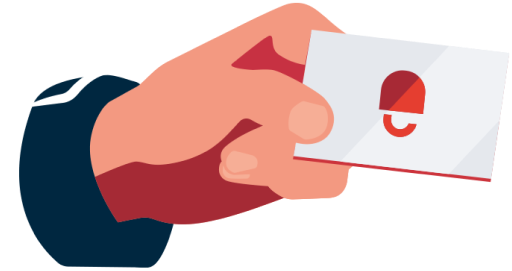